Why Small Merchants are Important to the Magento Community

Small merchants using Magento. Everyone has an opinion, and they’re not all favourable.

Of the 200,000+ online stores that use Magento, a lot of these are smaller merchants.

Sure, many would argue that small merchants are better suited to using Shopify, Zoey, BigCommerce or another out-of-the-box e-commerce platform marketed at small e-commerce stores (I hear your cries as I write this). That Magento is too complex for the average small merchant with little to no technical knowledge or training. That the promise of a free and powerfully customisable open-source platform is an empty one unless it’s matched by the resources to invest in getting it right. Do small merchants need the customisation power of Magento at this stage of their e-commerce journey? Maybe. Maybe not. It really depends.

But these merchants have done their research and have chosen Magento for a variety of reasons - whether it’s the customisation and enhancement potential, the promise of owning their own patch of e-commerce real estate under their control, or even the perceived ‘free’ price-tag. From their perspective, Magento aligns with their business goals.

Who’s Who In The Magento Community

Before we get started, it’s helpful to do a quick review of the main players in the Magento world and understand how their role affects the broader Magento ecosystem. Here’s my view of how the various players interact: 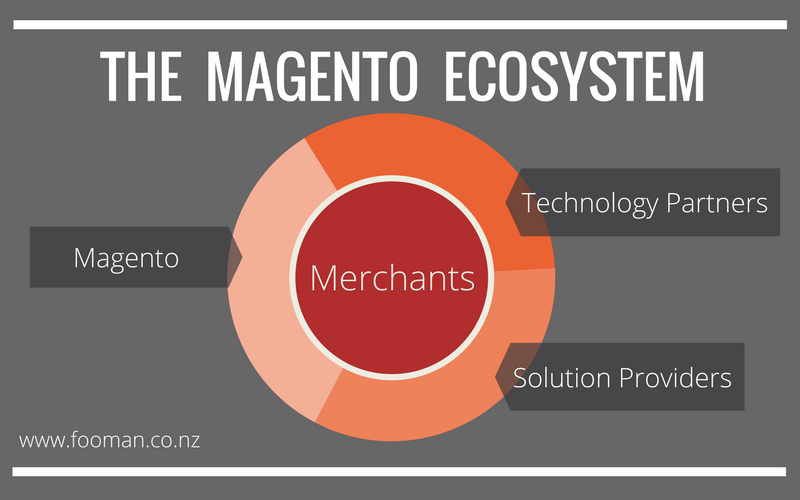 What’s the importance of small merchants to these players?

Small Merchants Help to Make Magento Better for Everyone

The majority of Magento’s resources go towards selling, supporting and improving Magento Enterprise. So it’s only logical that Magento receives most of their feedback on the Magento platform and its future direction from paying Enterprise customers and the Solution Providers (mainly paying partners) that enable those merchants.

This focus on Enterprise level business is necessary to generate the revenue needed to support and grow the Magento platform. It’s perfectly understandable that Magento’s strategy is to focus on their highest revenue customers and support their success with Magento. I’m not trying to argue against it.

But somewhere in this focus on big players, I can’t help but feel there’s a missed opportunity to gather real, grassroots feedback from the many thousands of smaller merchants who use Magento.

Small merchants tend to do most things themselves - many don’t have the budget to hire a Magento developer (I suppose this lack of spending power is the main reason they’re often seen as unimportant). They’re at the forefront of their e-commerce business - this means putting the Magento platform through its paces and making sure it works as intended.

This means that small merchants kick butt at finding bugs, quirks and isolating problems. In small businesses, the same person identifies a business need, makes changes to Magento settings to solve it, and monitors if the change was successful. They know immediately if the change worked as intended. They compare Magento tax settings down to the cent on a single order. They scrutinise the ‘small issues’ that on their own, might seem trivial. But cumulatively, these issues have a big impact on people’s experience using Magento.

Collectively, small merchants are responsible for thousands of small-scale tests of the Magento platform with real store data - every single day. They are the thousands of day-to-day Magento users who help iron out Magento’s quirks and confirm its functionality works as it should.

Small merchants create bug reports, feature suggestions and everything in between help to make Magento stronger. This is valuable feedback which can be used to improve the Magento platform for all users - small, large and Enterprise level merchants, right down to technology partners and solution providers.

Small Merchants Help to Make Extensions Better for Everyone

Small merchants are as real as it gets when it comes to a simple, efficient feedback loop for Magento extensions, themes and integrations.

As an extension developer, small merchants are the best source of feedback and closest connection to our software in actual use that I could ask for. It’s invaluable for improving the features, usability and quality of our extensions.

Working directly with small merchants, I know that requests and feedback come from ‘on the ground’ use and experimentation with Magento. I know that they’re doing a lot of tinkering with the extension and are quick to share the results. Feedback is not being funneled through business analysts or corporate bottlenecks - it’s pretty much instant.

Merchants tend to also be the closest to understanding what new features should be added to each extension. Getting the chance to connect to the actual user of an extension gives me close, realistic feedback that is essential to Fooman continuing to develop high quality extensions that solve real business needs.

Yes, this is nice feedback which helps my business. But well-functioning extensions benefit the entire Magento community, not just extension developers:

Supporting small merchants enables them to grow and scale into bigger e-commerce players. Medium and large sized merchants are not born overnight. They develop over years with a lot of smart people, hard work and encouragement.

Of course, not every small merchant grows to this level. Many, many small merchants will remain one-person operations. They’re able to earn a solid income and support their families using Magento, and that’s pretty cool.

But who knows? I’m willing to bet that some small merchants today will grow to become Magento Enterprise users in the future. I’ve personally witnessed the rapid growth of some standout merchants over the years. In 2009, I first met Graham from Marine Deals. He was working hard to grow his very small company on Magento, and attended our New Zealand Magento Meetup. Fast-forward to now, and he’s running a thriving company with 25,000+ SKU’s sold internationally and a growing team of 26+ staff. Marine Deals placed in the Deloitte Fast 50 business growth awards. It might still be a small business by international standards, but there’s a huge number of Magento developers and extension companies who would love to have Marine Deals as a client.

For those small merchants which grow into bigger players, their growth and success is a catalyst which feeds others in the Magento ecosystem. As the merchant grows they require more support from Magento, technology partners and solution providers. Suddenly, these companies are now in a position to hire a solution provider as they need to invest more in technology and design, or possibly rebuild their DIY site from scratch. They’re competing in a league where upgrading to Magento Enterprise would be a savvy business move. They’re paying your salary as a freelance developer. We all win.

The other thing I’ve noticed from dealing directly with small DIY merchants is the power of the new skillset they’ve acquired - learning to code Magento. I’m aware of a quite a few people who started out running their own Magento stores on the side, have taught themselves to be impressive coders, and have gone on to work as Magento developers. I’d argue that they’re pretty darn good developers too. They’re acutely aware of the business needs of merchants and are in a unique position to deliver on this. Solving Magento problems requires more than just a good coding brain.

In order for a merchant to grow and scale to the point where they require the power of Magento Enterprise (and can justify its price tag), they first need support from Magento, technology providers and solution providers. We have the unique opportunity to nurture and connect directly with small merchants.

Instead of constantly hovering over small merchants questioning their platform choice, we should be providing support to them as they tinker, pivot and grow their business.

What can (and should) we be doing? In my view, this would be a good start:

As developers and as a community:

If I worked at Magento:

I’m curious if you share my view about the small merchants in our Magento community. Share your thoughts in the comments - what should we be doing to help small merchants have a positive experience with Magento?

Founder and Lead Developer at Fooman